More than just a joker

Andre Mauger (OW1995) describes his serendipitous journey from a bridge on the Barwon River to the inner sanctum of the Australian Men’s Cricket team.

I never played cricket at school, but sport has played a part in my serendipitous career path. It was my failure at the Wesley College rowing sheds that, in part, led to a career in videography and now as a cinematographer for Amazon Prime Video’s recent eight-part docu-series, The Test: A new era for Australia’s team.

Each year the top five crews from every APS school competed at the Head of the River on Barwon River in Geelong. At the start of the 1992 rowing season I was a hopeful cockswain vying for a berth in the Fourths. Senior coach Julian Whitehead took me and Tim Grey (OW1995) aside at the sheds. ‘One of you two will be selected to steer the Fourths, but whoever misses out will steer the Fifths,’ he said. ‘Either way you’ll both get to make the trip to Geelong for the Head of the River.’

Tim won the Fourths spot, but the Fifths already had a set cockswain, and I was relegated to the Sixths. Disappointed to be missing out on the overnight adventure to Geelong, Mr Whitehead offered me a consolation – borrow Wesley’s shoulder-mount video camera to film rowing crews on the Barwon River.

Off to Geelong I went. Positioning myself at the edge of a bridge near the water’s edge, unaware of the silver lining on the clouds metaphorically overhead, I waited patiently.

Julian Whitehead’s eyes lit up when, later in the day, he reviewed the visuals. ‘Did you shoot that yourself? Steady hands there,’ he said. ‘How did you get that shot?’ Small praise goes a long way.

Operating a video camera came naturally but a career in videography did not. Christmas functions, surprise birthday parties, celebrity golf events, alternative education schools, each earned me a little cash in hand or a bottle of cheap champagne. Meanwhile my school peers were making strides in their careers as doctors, marketers, events managers and lawyers. My job prospects weren’t good. TV stations hired people who specialised in one area of production, not one person who multi-tasked. Then came the internet. As broadband grew stronger, so did the need for online video. One-man-band operators were in demand.

In 2007 I was hired to manage the online video team at the Herald Sun, where the focus was on breaking news and the AFL. My six years with News Corp ended abruptly with a redundancy in 2013 but it introduced me to influential people, one of whom employed me a couple of months later at Cricket Australia.

Criss-crossing the globe on cricket tours to the Caribbean, the subcontinent, South Africa, multiple World Cup tournaments and a junket tour of New York City in 2016, it was a dream job. I spent five years producing video content for Cricket Australia’s digital news arm, cricket.com.au, and after the ball-tampering scandal in South Africa I was awarded employee of the month. Then suddenly my contract was not renewed. ‘Budget reasons,’ they said.

Two weeks later two members of Cricket Australia’s broadcast team offered to chat over coffee. They explained how newly announced Head Coach Justin Langer and Captain Tim Paine had agreed to a documentary detailing their bid to win the World Cup and the Ashes. They needed a camera operator.

Two weeks after being shown the door I was on my way to the United Kingdom as a fly-on-the-wall filmmaker, catapulted into sensitive team moments, capturing the highs and lows – well, mostly lows – of a white-ball tour against England. Cricket Australia was stunned by the access the team granted my cameras, and I remained embedded within the touring squad for the next 16 months. ‘You’re now a part of the furniture,’ the players said.

One peculiar aspect of being in the inner sanctum of the Australian Cricket team is the tradition of joke-telling before a match. A player or coach can be nominated to tell a joke to the rest of the squad in a pre-match huddle on-field, often without warning. It acts as a way to loosen the mood and keep players calm and focused.

Jokes within the inner sanctum 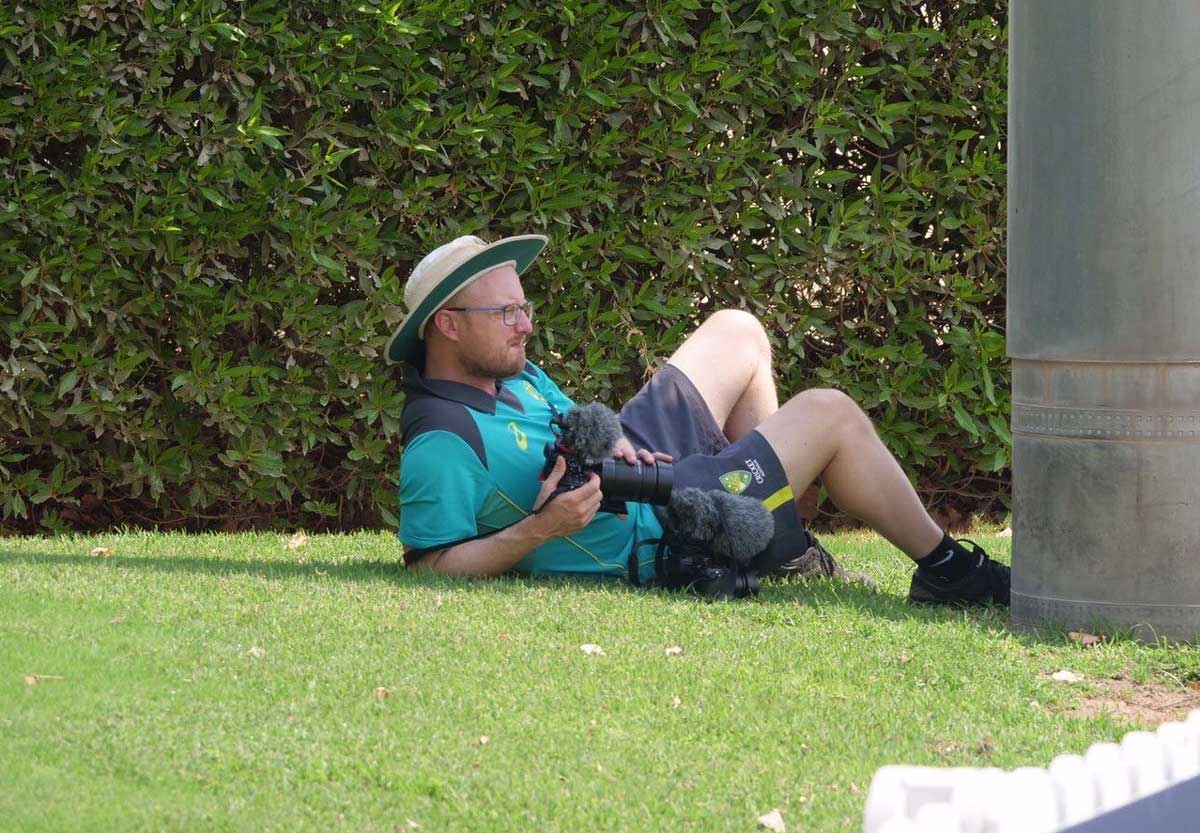 One day at breakfast in Manchester I approached coach Langer. ‘I’ve got a joke,’ I said. His eyes lit up. ‘Do you want to tell it at a training session, or do you want the big dance?’ he asked. ‘I’ll take the big dance,’ I said. Langer rubbed his hands together. ‘You’re on!’ The next match was a T20 against England at Edgbaston Stadium. In the team huddle Justin Langer relinquished me of my camera and placed me front and centre to tell my joke. It was one from the quadrangle at the St Kilda Road Campus in the early 1990s. In front of Ricky Ponting, Tim Paine, Aaron Finch, Glenn Maxwell and Marcus Stoinis, among others, the joke had the desired result. But from this point onwards Langer thought I had an endless supply of humorous material. At almost every team huddle he’d say a few words to the players before throwing to me. ‘Have you got one for us?’ he’d say.

For the next 16 months I packed several joke books in my bag. Throughout the Test series against Pakistan in the UAE, a home summer series against Virat Kohli’s triumphant team, the white ball tournaments in India, a World Cup in the UK and that infamous Ashes series, Langer continuously called upon me to tell jokes. ‘It takes the pressure off everyone else,’ the players said.

Joking aside: reducing the pressure on players

Joke selection was crucial. Khawaja, Zampa, Finch and Kane Richardson were hard markers. Many late nights were spent in my hotel room searching for a new joke that may – but often did not – live up to team expectations.

When a Cricket Australia executive got wind of my joke-telling she became curious, and one time asked me to provide an insight to the kind of humour the team enjoyed. I plucked the first joke that came to mind. But I learned a valuable lesson here. Know your audience!

In mid-2019 we were back at Edgbaston Stadium on the morning of day one of the first Ashes Test. Langer reminded the players of the importance of getting off to a good start, then threw to me. ‘Have you got one for us?’ My joke got off to a good start then something went wrong towards the end of it: I forgot the punchline. The team exploded with laughter. Warner and Smith in particular enjoyed my brain fade.

Maybe the jokes endeared me to the team, and perhaps that helped when the losses piled upon them and the dressing rooms were a dark experience to be filming. I can’t be sure. In their anguish after a one-day white-wash against England then losing a historic Test series to India on home soil a few months later, there was not one coach or player who bemoaned my presence in the room.

Thankfully the one-day team turned their fortunes around in India, as did the Test side in the UK, making for a fitting redemption story. The results can be seen in the docu-series The Test on Amazon’s streaming service.