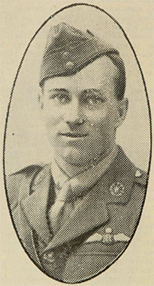 Lieutenant Leslie Charles Focken (OW1910), of the Royal Flying Corps, was first reported missing in France, and afterwards killed on 26 October. As a private, Focken went through the Gallipoli campaign until October 1915, when enteric fever overtook him, and he was invalided to England. After training in an Aviation School he gained his commission, and was sent to France. In a letter from France, dated 20 July, he wrote:—

Thanks very much for the copy of the 'Wesley Chronicle' May, which I received here yesterday. Just a line to let you know what has become of me. I was sent to England from Gallipoli with enteric fever, and after recovering in December I was given six weeks furlough, and in that time gained a commission in the Royal Flying Corps. I went through my training at Brooklands and Croydon aerodromes, and took my ' wings' in May. Since then I have been out in France, and we have done useful work in connection with the recent offensive. It is entirely due to the Flying Corps that the Germans were unable to locate where we were, concentrating our forces for the push. As far as aerial observation is concerned we have kept the Germans absolutely in the dark. Just previous to the great advance we attacked not only their aeroplanes, but several of their balloons with huge success, bringing six down on our sector of the front alone. Of course, the enemy is very active with anti-aircraft guns, and have on some occasions brought some of our machines down, which under the circumstances must only be expected. However, the French and British absolutely predominate in the air now, as they do on the seas. Here we fly all day and every day ranging artillery, taking photos of trenches and batteries, dropping bombs, &c., while we only see a German machine about once a month, and then at a height of about 12 to 14 thousand feet. Usually we manage to bring one or two of them down. 1 might mention that I have now changed my name from Focken to Fawkner since joining the Imperial Forces. Hope the old School is still well in the running. Kindest regards. "(Sgd.) L. C FAWKNER, 2nd Lieut."