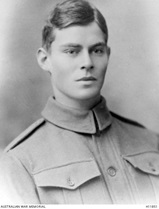 Private Henry TC Alcock (OW1909) arrived at Gallipoli with the 23rd Battalion on 30 August 1916. On 7 November he reported ill with suspected influenza and gastritis. Shortly thereafter his appendix was removed, and despite being moved to hospital in Egypt, his condition did not improve and he died on 14 February 1916.

Six letters written by Adcock to his family are held by the Australian War Memorial. The letters are typical of soldiers stories of the boat voyage, training in Egypt and finally at Gallipoli. His last letter on file to his mother, dated 25 October 1915, notes that his battalion is stationed at Lone Pine.

…the Turks are only fifteen yards away and in some places only a sand-bag separates them from us. We often throw notes over to one another and once the Turks threw a note over saying, “You are too weak to advance and too strong too retire and we are the same, so what the ---- are we going to do about it?” Another one said, “If you don’t surrender in twenty-four hours we will!”