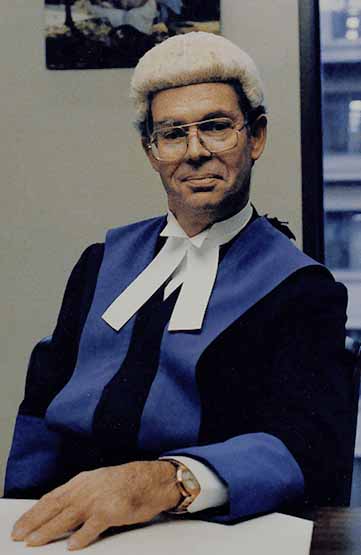 After completing articles with E Edgar Davies & Co, Glenn signed the Bar roll in 1955 and took silk in 1973, joining the Victorian Bar Council in 1976. In 1982 he was appointed Chief Judge of the County Court. Chief Judge Peter Kidd said of His Honour Glenn Waldron, ‘Under Chief Judge Waldron’s leadership, the County Court dramatically widened its civil jurisdiction, commenced upon the path of engaging with information technology, engaged in significant pre-trial case management reform and oversaw the development of the Court’s current landmark building… In recognition of his lasting achievements, the Court’s Waldron Hall was named in his honour.’

After almost 21 years as Chief Judge of the County Court, Glenn Waldron retired from the post on 24 November. The LIJ interviewed Mr Waldron during his last days as Chief Judge.

When barrister Glenn Waldron QC was appointed Chief Judge of the County Court in February 1982 he inherited a court that was showing classic signs of middle-child syndrome. While the Supreme Court was taking the spotlight by conducting the state’s most serious murder, rape and armed robbery trials and the Magistrates’ Court received kudos for ploughing through the majority of the state’s petty crime cases, the County Court was largely being ignored.

What little attention it was getting was based on its 14-year-old building that was already too small and showing external panel problems that would soon need the support of unsightly scaffolding.

However, after almost 21 years under the leadership of Chief Judge Waldron, the County Court has shrugged off its inferiority complex.

The Court is now Victoria’s pre-eminent trial court. It has also dramatically widened its civil jurisdiction from $20,000 to an unlimited amount for personal injuries, and from $12,000 to $200,000 for non-personal injuries, and has become a world-leader in the use of information technology.

It has also moved into a 42,000 square metre building – diagonally across from the four-times smaller old building – that has quickly become one of the most striking and functional court buildings in Australia.

The new building has become a potent symbol of the changes the Court has gone through over the past two decades.

Once almost invisible compared to the beautiful Supreme Court building and the imposing new Magistrates’ Court building, the County Court now towers proudly above the other two.

The Court with an inferiority complex has moved into a superior complex. Even the make-up of the judges of the Court has changed. In 1982 there were no women among the 34 judges on the County Court Bench. Now there are 17 women on a Bench of 58 judges.

These changes occurred during Chief Judge Waldron’s reign, which officially ended on 24 November. Yet, ask the man himself for his take on the transformation and he is humble.

“It is about what the Court has achieved,” he said, while sitting in the Chief Judge’s office a few weeks before his last day. “Maybe I would say that on a subjective level I am a very conservative person who has, I suppose, overcome that inclination to help reform the practices of the Court.”

Other leaders of the legal profession are more direct. Law Institute president David Faram described Chief Judge Waldron as one of the best judicial administrators in Victoria’s history.

“He has overseen an almost complete redevelopment of the Court and the way it handles its business,” Mr Faram said. “His leadership of the Court has addressed a whole heap of problems, particularly hearing dates, trial lengths and delays in both the civil and criminal jurisdictions.”

Victorian Bar Council chairman Jack Rush QC said Chief Judge Waldron had moulded the Court into the leading county or district court in Australia, while state Attorney-General Rob Hulls thanked him for his “exceptional contribution in strengthening our justice system”.

Yet, despite these accolades, Chief Judge Waldron refuses to yield to self-congratulation. It is all part of his philosophy that the work of the Court speaks for itself.

“We are here to do a job, to do it publicly, and if that job is deemed not to be good enough then it is up to the public and the media to say so,” he told the LIJ. “If it is commendable, then you’d think there’d be some kudos expressed. But at the end of the day – and this is probably one manifestation of my conservatism, I suppose – I don’t think it is part of the Court’s functions to be out on the hustings proclaiming what we do.”

According to the latest report of the federal government’s Productivity Commission on Commonwealth and State Service Provision, the County Court fares very well.

The County Court completes 83 per cent of non-appeal criminal matters within 12 months, which is higher than all other county or district courts except for South Australia. While it completes only 42 per cent of civil cases within one year, it leads the country in completing such cases within 18 months.

The report also found that the Court completes criminal cases in a median time of 23 weeks – 12 weeks less than the New South Wales District Court.

It is with these achievements that Chief Judge Waldron leaves the post due to compulsory retirement.

“I’m certainly completely accepting of the fact that it’s time for me to go,” he said.

“Apart from everything else, when you get to retirement age you become aware of the generation gap between yourself and so many in the Court, particularly among the incoming judges where none of them are particularly young but are 20 and 30 years younger than I am. I think it just accentuates the obvious that a mandatory retirement age is a very sensible thing.”

Among the many reforms made to the County Court during his time on the Bench, he counts three as the most significant.

The first is the changes to trial and case management procedures, such as increased use of pre-trial hearings before listing judges, that has led to fewer trials collapsing on the day they come to court, shorter trials and cost savings. It is these changes that have led to the Productivity Commission’s favourable findings.

The second reform has been the increased use of technology, which has led to a world-leading array of videoconferencing, court reporting and case management facilities.

And the third reform is the new County Court building, which was the culmination of almost 15 years of lobbying by Chief Judge Waldron and other judges of the Court.

“There is no more beautiful building in the world than the Supreme Court. But as a functional court, I think it has to be said that [the new County Court building] is far and away the best in the land and, probably, I suspect the world,” Chief Judge Waldron said.

“It was abundantly clear to everyone that we had well and truly grown out of where we were. It was inefficient to be splintered hither and thither.”

Again, he deflects the credit to successive state governments for making the project a reality and the work of fellow judges David Jones, John Hassett and Michael Strong.

The work needed to draft, implement and run such changes has led to a change in the role of the Chief Judge.

Chief Judge Waldron said that when he first began in the job he dedicated about two-thirds of his time to sitting in court and the other third to administrative duties. That split has now swung around, with administrative work dominating his schedule. It is one change he hoped new County Court Chief Judge Michael Rozenes did not follow.

This change in emphasis has also seeped down to the judges of the Court, whose job Chief Judge Waldron believes has become more onerous over the past 20 years. He puts this down to the increased volume of work, the large increase in the complexity of cases and an increase in scrutiny from the media.

On the subject of media scrutiny, Chief Judge Waldron said one aspect in particular that he has been passionately opposed to has been a growing trend to give a large volume of coverage to cases just before sentence is passed. The argument for the media to do so has been based on the reasoning that judges are independent and intelligent enough not to be influenced.

“But when either in a newspaper or on television it is said that with a particular individual a heavier sentence is required . . . pressure is being brought on the judge to exercise his or her discretion in a particular way. I think that is quite invidious.”

But he quickly makes the point that he is not anti-media and believes the media has an important role in informing the public about the Court’s work. Work that he has heavily influenced – for the better – over the past 20 years.

THE CAREER OF GLENN WALDRON QC